Construction work has begun on the page I'm making that is dedicated to an amazing woman!

You will be seeing a lot of activity on this page during the construction time, and it will continue to get added to in the time ahead... 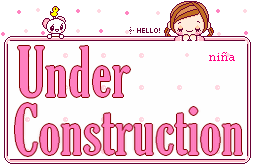 This catchy, little phrase that has become the title of this page is actually inspired by one of those old family stories that gets passed along -- this one being about Uncle Kermit (who is now 88 as I'm writing here on April 7, 2015 -- with his next birthday coming up on December 9 of this same year) back when he was a youth.

Suddenly, in the middle of some kind of conversation, he said, "Speaking of Betty Ann..." even though nobody was speaking of any Betty Ann at the time and it was more like my then love-struck uncle wanted to get the conversation focused on a certain Betty Ann.

Now, the Betty Ann to whom this page is dedicated isn't, of course, the same one whom Uncle Kermit wanted to become the topic of conversation, but she's really amazing -- like an angel in a human body!

It's interesting how things seem to happen at just the right time so many times.

For instance, how long it took me to get an apartment in Gillespie Tower in Muncie where I now live.

I remember how disappointed I was (and, especially, with the weather getting cooler and cooler and heading towards colder and colder) when there wasn't an immediate opening for an apartment in the building -- and that was one of the things that gave me a case of the blues on October 24, 2013.

But, had I gotten into an apartment then, I would have, probably, been moving some things over there and moving in on that day instead of going along North Broadway in Anderson and noticing a fuzzy-looking, little man on the west side of the street and ending up becoming good friends with him!

Just as he has done with so many others, Larry "The CanMan" Van Ness, lifted my spirits that day just by being himself!

In similar fashion, I kept coming so close other times to having an apartment there -- but I was unable to get to Muncie and claim it at those various times.

Then, one day, it all worked out, and I signed the lease on September 22, 2014 -- and, because it was the right time for this to take place, I ended up having Betty for a next-door neighbor, and she has truly been a blessing to me!

I'm not the only one who has been blessed by this amazing and wonderful woman -- but, when that moving van pulls out of here on May 1, that will mean that our seven-story neighborhood will be losing a beautiful saint of a neighbor, but her daughter, son-in-law, and granddaughter down in Virginia will be having a very precious person living with them and making wonderful memories!!!

As I mentioned previously, Betty will be leaving for Virginia soon.  Not only is she somebody who is wanting to be closer to her daughters and grandkids (living with her younger daughter, son-in-law, and youngest granddaughter), but, also, she will, likely, be needing a lot of help sometime in the future due to recently learning from her doctor that she shares more with Glen Campbell than trying a little kindness  (Betty is actually known for going way beyond trying a little kindness to practicing a lot of kindness and is an angel in an earthly body!).

At this time, we're in the process of planning a going away party that will provide (her treat along with some chipping in by others) free party food & good, clean fun for her neighbors plus a few specially invited guests.

I'm not sure when I'll be back online again, but I'll let you know all about that party when I do!  It should be a really fun and memorable event!

It's April 21, and I've started working on this page again.  For starters, I want to share both the TinyURL with a preview here and the regular URL for this page...

That way, you can share the link to this page in whatever way you wish, depending on what kinds of space you have and other considerations.

Now, I'm going to be sharing this page on Twitter and on over into Facebook so you can be reading what I have so far, but I'm also going to be working on another part to go into it.  I managed to make it to the library early, and there are enough vacant computers that I believe I can stay online for the whole day and get things a bit caught up.  We'll see about that...

Here's an entry I made about Betty and finished a few minutes ago...

This might (or might not) be the last entry I make about Betty until she leaves on May 1 (the first time I get to a library after that, which, likely, won't be before May 4).  I hope you're enjoying the journey so far.  As a lot of this page has been taken up introducing her, I think I'm going to hook it to another page that will provide more links as I write them...

coming very soon, the next page of Speaking Of Betty Ann...

glitter-graphics.com
Posted by Ainsley_Jo_Phillips at 2:48 PM