Dr. Martin Luther King, Jr. and Mark "Hard-To-Please" Arnold  are two people who were taken from us way too soon, and both of them were born in different years on the same day of the month:  January 15.

January 15 reminds me of them -- but it also reminds me of another special friend who was born on May 14, 1941:  Russell Thomas Hartsaw.

January 15, 2007 (when Dr. King would have been 78 and Mark/Hard-To-Please would have been 47) was a milestone day in my life, because it was the day that I met Russell online at an erstwhile social site called (to the best of my memory) Duno.

At the time (as I continue to do to this day), I was seeking out people who were serious about making a positive difference in the lives of others who needed extended hands instead of pointing fingers.

I was impressed with a post written by someone who had spent much of his life incarcerated but was now out making a difference in the lives of homeless and/or at-risk children, teens, and young adults.

We began to write to each other, and I recommended some writing sites he could use to both get the word out about what he did (as well as his dreams of being able to do even more) with one of those being a place called Judy's Book (I went there to investigate and found out that my portfolio was still intact with at least some of the things I wrote -- which is more than I can say for Epinions, but that's another story entirely).

I was unable to locate what Russell wrote, but he actually did a very complimentary review of me, and I was really touched and told him so online.  He gave me his phone number, and we did a three-way call to my mom because she also wanted to thank him for doing this.

Thanks to misbehaving computers and other interruptions, I'm going to have to close shop here until next time I'm online, but I wanted to, at least, have the start of this tribute to a wonderful person posted on the 74th Anniversary of the date of his birth, because the world is a much better place for having Russell to pass this way... 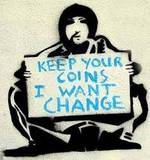 glitter-graphics.com
Posted by Ainsley_Jo_Phillips at 5:32 PM